Fern M. Steiner has been listed in The Best Lawyers in America® (2023 Edition) for work in Employment Law – Individuals and Labor Law – Union

Fern M. Steiner has been listed in the 28th Edition of The Best Lawyers in America® for work in Employment Law – Individuals and Labor Law – Union

Fern Steiner of San Diego, has been appointed to the California Water Commission. Steiner has been an Attorney at Smith, Steiner, Vanderpool APC since 1987 and a Shareholder there since 1993. She was an Attorney at Richard D. Prochazka APC from 1984 to 1987 and an Attorney at Karmel and Rosenfeld from 1977 to 1984. Steiner is a member of the San Diego County Water Authority Board of Directors and a trustee for San Diego Youth Services. She earned a Juris Doctor degree from John Marshall Law School. This position requires Senate confirmation.

Jon Y. Vanderpool – Diversity is critical to our firm’s business and culture simply because it’s critical to society.  Everything and everybody are stronger, more perceptive, more empathetic, more tolerant, and more successful in proportion to its emphasizing and incorporating diversity.

Fellow Lesli Venegas Hernandez – USD – Before starting my DFP internship, I was hoping to learn what civil litigation entailed and what it looked like specifically in employment law.  Although my fellowship is still in process, I have already learned so much about this area of law and have also gained new practical and legal research skills.

Fern M. Steiner has been listed in the 27th Edition of The Best Lawyers in America®

An adverse holding would have linked a public employee’s statutory right to contest disclosure to a fee award that would mean financial ruin for the average teacher or public employee. We’re hopeful that this ruling will deter future fee threats against individuals who initiate good faith reverse-Public Records Act (CPRA) actions to protect their rights while respecting the public’s interest in government affairs.

First, the court refused to entertain a de novo standard of review and applied an abuse of discretion standard (limiting the ability to disturb the lower court’s decision unless it was clear error). Most importantly, the court picked apart the argument that the 2018 Pasadena Police Officers’ Association (PPOA) case “mandated a fee award” for any reverse-CPRA litigation decided in the requestor’s favor.

The court’s careful distinction of the PPOA case, which awarded fees against police officers and their union seeking to withhold an investigative report related to an officer-involved shooting, is impactful:

“Finally, PPOA does not persuade us that the trial court erred in denying Voice private attorney general fees. PPOA does not mandate that all requesters in reverse-CPRA actions be awarded attorney fees; it points out such a party “can recover fees under section 1021.5.” (PPOA, supra, 22 Cal.App.5th at p. 155, fn. 7.)” The court rejected the claim that “PPOA mandates a fee award.”

We’re proud to advocate for public-sector educators and continue our firm’s goal to provide affordable, effective representation for working-class individuals.

March:  The unprecedented impacts of COVID-19  continue to disrupt all aspects of our society, including employment rights and interests.  While our courts and administrative hearing venues remain closed now into May 2020, our firm remains operational as necessary to address the rapidly evolving demands of our clients.

The effects of this crisis upon employees are as diverse as the myriad of occupations, compensation and benefits applicable.  Many of our clients are advantaged by membership in public and private unions/associations that advocate for maximum protections.  But most employees must advocate for themselves by posing questions to their employers, such as confirming employment benefits available, whether your position may be “essential,” paid and other leave options, and asking for referrals to federal, state, county, or other information and benefit resources.  Here are a few links/memoranda that may be of assistance or comfort.

Mayo Clinic doctors reminding us we need to lean on each other through this:  https://www.youtube.com/watch?v=5NJJQiMaQHQ

If you have reasons to believe that an employer may be taking advantage of this crisis for its own benefit without affording yours, please email us at [email protected].

January: SSV attorneys attend the annual All Peoples Breakfast sponsored by Alliance San Diego, celebrating the memory of Martin Luther King, Jr., and recognizing community leaders for their contributions furthering his legacies of equality and justice.

Fern M. Steiner has been listed in the 26th Edition of The Best Lawyers in America®. This is the 30th year Fern has been recognized.

Fern M. Steiner has been selected to the 2019 San Diego Super Lawyers list

Fern M. Steiner has been recognized in the Lawdragon 500 Plaintiff Employment Lawyers Guide

Fern M. Steiner has been selected to the 2018 San Diego Super Lawyers list, for the 11th year in a row. 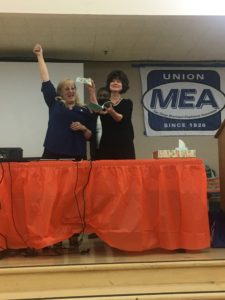 Fern M. Steiner has been recognized in the Lawdragon 500 Plaintiff Employment Lawyers Guide

March 8, 2018 Fern Steiner was a panel member in a plenary session “Watch the Pendulum Swing” at the American Arbitration Association National Labor Program

Fern Steiner will be speaking at the Workers’ Rights Clinic regarding Union Rights on March 20, 2018 James Stern was again a presenter at the Sterling Education Services

Fern M. Steiner participated in a plenary panel at the National Academy of Arbitrators on “Workplace Drug Use; A New Generation of Issues.”

Jon Vanderpool speaks to Encinitas students on Diegueno Middle School’s annual Career Day May 19, 2014, about tools for succeeding on their career journeys ahead.

Fern M. Steiner participated in a plenary panel at the National Academy of Arbitrators on “Workplace Drug Use; A New Generation of Issues.”

Jon Y. Vanderpool is promoted to Master of Louis M. Welsh Chapter of the American Inns of Court

Police officer’s placement on administrative leave after speaking with internal affairs was considered actionable retaliation for exercise of free speech right.  In determining whether subject matter of speech is related to employment, Courts must consider the employee’s practical job duties even where different from the job description.